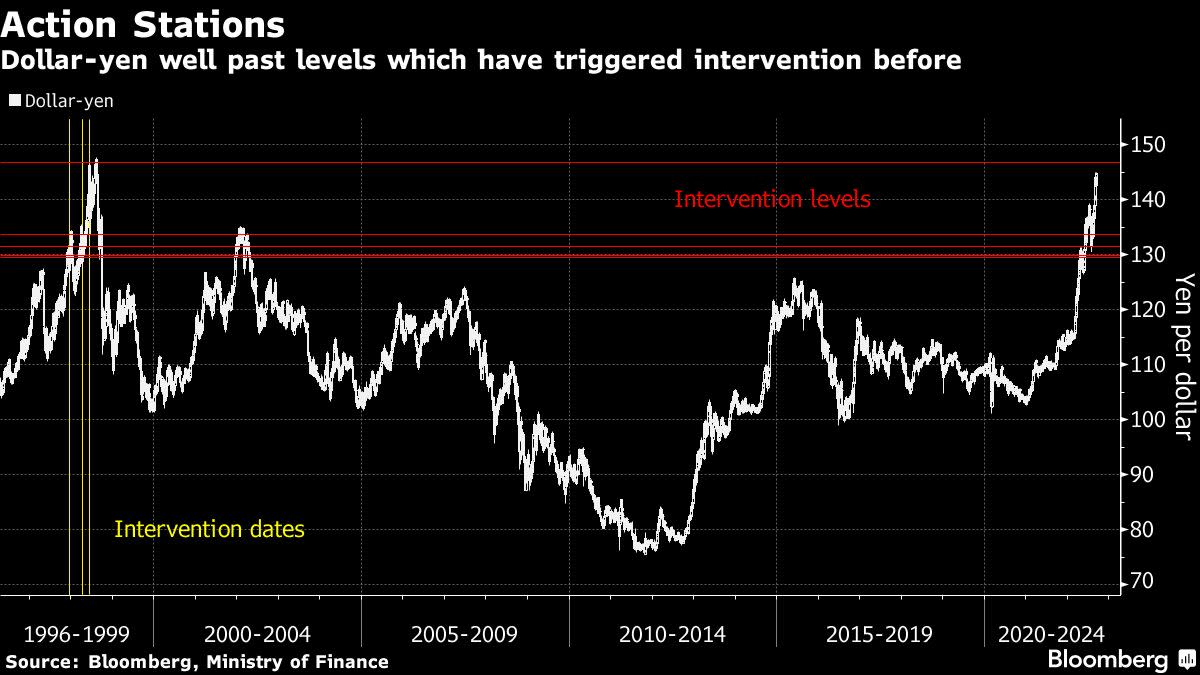 (Bloomberg) — The yen rallied further away from the closely-watched 145 per dollar level after the Nikkei reported the Bank of Japan conducted a so-called rate check in the currency market, a move considered a precursor for intervention.

Most Read from Bloomberg

The currency rose as much as 0.6% to 143.67 after falling to 144.96 against the dollar early in the Asian session. Around lunchtime Wednesday, Finance Minister Shunichi Suzuki said Japan wouldn’t rule out any response if current trends in the FX market continued and those options including stepping into markets.

A break of 145 would bring 146.78 into play, the level reached before a joint Japan-US intervention to support the yen back in 1998.

“There’s been a drop of two or three yen against the dollar since yesterday — this is clearly sudden,” Suzuki said. “We think there are speculative moves behind this and we are very concerned.”

“If this kind of situation continues, we won’t rule out any options in responding,” he added, reiterating a warning shot given earlier in the day by top currency official Masato Kanda. When asked a direct question if intervention was one of those options, Suzuki said it was.

Japanese authorities have been stepping up verbal warnings as the yen has fallen but these have failed to turn the tide against dollar strength. While Japan’s currency steadied somewhat after BOJ Governor Haruhiko Kuroda expressed concern over rapid yen selling last week following a meeting with Prime Minister Fumio Kishida, the gain was short-lived.

A rate check happens when the BOJ calls traders to see the price of the currency against the dollar — a move that can serve as a warning for them to avoid one-way batches. It usually happens when volatility increases and verbal intervention may not be sufficient.

Putting further pressure on Japanese officials Wednesday, the country’s benchmark 10-year yield hits the 0.25% upper limit of the central bank’s tolerated range. Earlier in the day, the BOJ had boosted its scheduled bond purchases once more in a bid to cap the rise in yields.

The timing of Kanda’s comments was “a bit awkward and the impact may be a bit weak, coming amid the broad dollar strength after the strong CPI,” said David Lu, director at NBC Financial Markets Asia in Hong Kong, following Kanda’s earlier remarks. “It is difficult to expect dollar-yen to ease back to 140 on verbal intervention in an all-out dollar rise situation.”

The impact of the stronger dollar wasn’t just confined to Japan, with officials across Asia busy trying to bolster their currencies. A tumble in South Korea’s won sparked comments from officials there that they were closely monitoring markets. China extended its currency defense by setting its reference rate for the yuan with the strongest bias on record.

Japan’s currency has tumbled more than 20% versus the greenback this year due to widening policy differentials between the two nations. Tuesday’s US inflation data reinforced batch the Fed will raise its benchmark by 75 basis points at this month’s policy meeting, while the BOJ is forecast to keep rates on hold at the end of its September gathering.

“Speculation will continue and volatility will remain high until the Fed meeting next week,” said Takeshi Minami, chief economist at Norinchukin Research Institute. “While the BOJ will continue to send warning signals on the yen’s rapid weakness at its meeting, it is very unlikely it will change policy in response to the yen’s weakness.”

That leaves any action from Tokyo in the hands of the finance ministry. Japanese officials’ language on recent yen moves is approaching the wording used before they directly intervened in the currency market in the past.

Options traders are beginning to look for protection against possible action from Japan. One-month risk-reversals for dollar-yen — a gauge of expected direction for the currency pair over that time frame — point to near-term downside.

Still, economists, including Minami, say the chance for intervention is low. While Japan has more firepower in its foreign exchange reserves to prop up the yen than it did in 1998, analysts see little chance of Tokyo being able to turn the trend through intervention without US help.

Japan’s $1.2 Trillion Buffer May Not Scare Yen Bears Without US

“We recently saw a concerted effort from the BOJ, MOF and government to jawbone the yen but with limited success,” said Matt Simpson, senior market analyst at City Index in Sydney. “Part of that success could be attributed to a weaker dollar. With expectations of higher Fed rates and widening yield differentials in favor of the dollar, it could make further jawboning efforts feel like they’re shouting into the wind.”

(Updates with details on a rate check.)

Most Read from Bloomberg Businessweek